The 91st Junior High – High School Track & Field Meets, “Delteia 2019,” were held on Tuesday, April 2, 2019.  The student percussion band, in its own distinctive fashion, opened the ceremonial part of the event.

During the ceremonial program, all student members of the “A” Association, as well as all students competing in the finals, paraded around the track.  Leading the procession was the Hellenic Police Band, which always honors us with its presence.  After raising the flag, singing the national anthem and placing a wreath in memory of College Founding Father Stephanos Delta, Mr. Nikolaos Tsavliris, President of the Board of Directors of the Hellenic-American Education Foundation, declared the games open.

The Delteia games took place in the presence of all Junior High and High School students, parents and friends of the College, who, with great satisfaction, watched the competition between grades in their struggle for the highest Overall Score.  With 178.5 points, the winner was the 9th grade.   Earning 757 points for his performance in the 400m Sprint (52”00), Alexandros Kapagiannidis was the male student with the best performance; the female with the best performance was Markella-Kalliopi Papandreou who scored 935 points for her performance in the 100m Sprint (12”21).

New Delteia records were set by:

New Junior High School records were set by Athens College student Nikolaos Kantzias in the Javelin Throw at 47.70m and Psychico College student Theodora Aza in the 100m Hurdle Race with a time of 15”44. 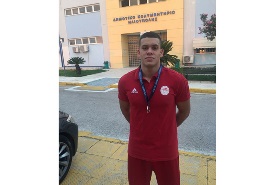